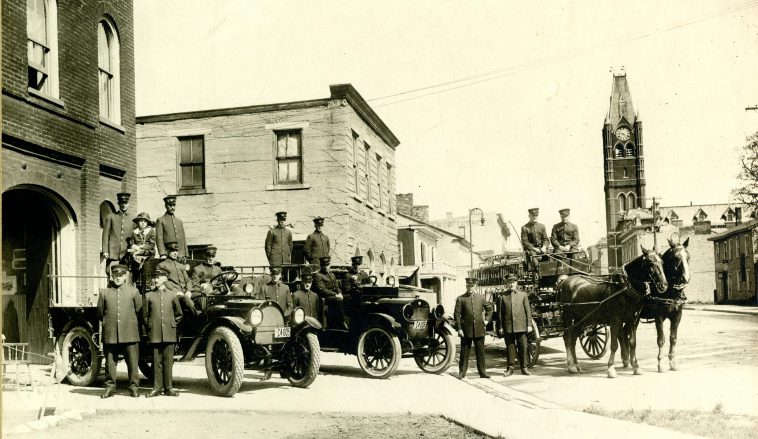 With its strategic location where the Bay of Quinte meets the Moira River, Belleville has long been a destination attracting people looking for a better life.

The site of the present-day city was first occupied by various Indigenous peoples, drawn to its sheltered waters, easy access to Lake Ontario and abundance of fishing, such as Anishinaabe (Mississaugas) peoples who had a village here known as Asukhknosk.

The first large group of settlers, some fifty United Empire Loyalists, arrived on our Bay of Quinte shores in 1789. Most notable was Captain John Walden Meyers who built a dam on the Moira, erected a sawmill, gristmill and distillery and operated a trading post and brick kiln. The gristmill drew settlers from Napanee to Port Hope and the community became known as Meyers’ Creek. He is credited with building the first brick house in Upper Canada in 1794.

Strong demand for timber in England in the 1800s made Belleville a bustling lumber town. Rich forests were accessible by the Moira River – logs were cut into timber at local mills and taken down the St. Lawrence to Quebec. With export in lumber and flour, and its harbour busy with vessels of every description, Belleville was known as the most prosperous town in Upper Canada.

A visit in 1816 by Lieutenant-Governor Sir Francis Gore inspired the residents to change the name of their settlement to Belleville in honor of his wife Lady Arabella. The arrival of the Grand Trunk Railway in 1856 gave Belleville a link with Montreal and Toronto. For many years the railway was Belleville’s largest employer.

While the lumber trade declined towards the end of the 1900s, handcrafted items gave way to factory-made goods. Foundries and manufacturers of furniture, wagons, carriages, candles and soap abounded.

Gateway to the Golden North

In 1866, the discovery of gold near Madoc earned Belleville the name “The Gateway to the Golden North” as miners stopped for supplies on their way north of the city.

The Corby family played an important role in the development of Belleville and the area, beginning with Henry Corby’s arrival from England in 1832. After running a bakery and serving in the Rebellion of 1837, he became a grain merchant along the shores of Lake Ontario. In 1857, Corby established a grist-mill on the bank of the Moira River and two years later built a distillery, one that would be in operation for 130 years. In 1867, the year of Canada’s Confederation, Corby was elected as the Mayor of Belleville and later served as a Member of Provincial Parliament.

Corby’s businesses were only part of Belleville’s flourishing agricultural activities. In the late 1880s and early 1900s, the region was well known for its fruit and vegetable growing and had many canning factories, including the Belleville Canning Factory, which was advertised to be the largest cannery in Canada. In addition, dozens of cheese factories in the area helped make the City and Hastings County renowned for their world-class cheddar.

It’s a beautiful day to enjoy the sunshine and f

Mother’s Day is almost here! A day to celebrate

It’s starting to get pretty colourful around her