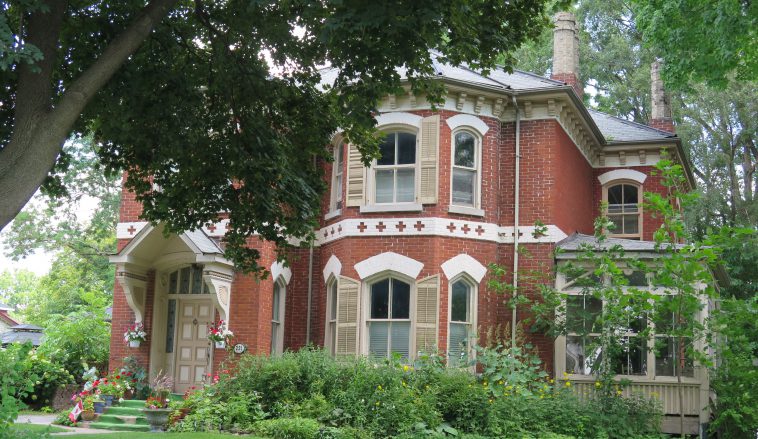 In 1789, some fifty United Empire Loyalists settled in what would later become Belleville. The most notable was Captain John Walden Meyers. Hardworking and resourceful, he built a dam on the Moira River along with a sawmill, a gristmill and a distillery. Meyers operated a trading post and a brick kiln. He is credited with building the first brick house in Upper Canada in 1794. Meyers’ gristmill drew settlers from Napanee to Port Hope to have their grinding done and the community soon became known as Meyers’ Creek.

A visit in the spring of 1816, by Sir Francis Gore, Lieutenant-Governor of Upper Canada and his wife, Lady Arabella, inspired the residents to change the name of their settlement to Belleville. Many of the homes the Loyalists and their descendants built are located in Belleville’s Old East Hill, a short walk from the Downtown District.

Discover part of Belleville’s history and significant buildings with beautifully preserved architecture by taking the Designated Historic Sites Walking Tour. The self-guided tour will take you to 34 properties including homes in the Old East Hill, downtown buildings, Glanmore National Historic Site and the Corby Rose Garden.

Local resident Miranda Fabricius is passionate about preserving the historic architecture and beauty of homes in the Old East Hill.

“The East Hill neighbourhood is a special place filled with wonderful old homes, terrific people and beautiful parks. My husband and I are working on our third restoration project here. With these projects, we are concentrating on restoring original features, while creating a space that works well for modern life. We love our neighbourhood and we want to help preserve these older homes so that their beautiful, original features can be enjoyed by many people for years to come. By doing this, we believe that we are inspiring others, while at the same time, helping to preserve our local heritage.”

Valentine's Day is just around the corner! 💝 If

Starting the week off by sharing what is possibly

Still need some weekend plans? Why not bundle up a

Who's getting out on the ice early enough to catch