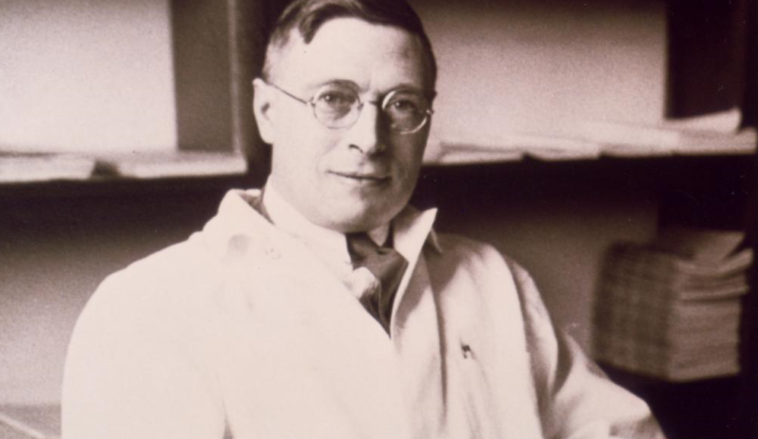 Dr. James Bertram Collip has been celebrated globally as a brilliant and innovative medical science researcher who played an important role in isolating insulin.

Dr. Collip was born in Belleville on November 20th, 1892. In his childhood, he could be found at the Belleville Market at his family’s fruit and vegetable stand. Showing an early interest and aptitude in science, he graduated from Belleville High School at age 15. Dr. Collip earned a degree in Chemical and Biological Engineering at the University of Toronto at age 20, a Master’s degree at age 21 and a Ph.D. at age 24. Relocating to the University of Alberta in Edmonton, he achieved a reputation as a highly respected and much sought-after professor in the burgeoning new field of Biochemistry.

In the fall of 1921, he visited his alma mater, the University of Toronto. At this time, research was being carried out to find a treatment for diabetes. In the laboratory of Professor J.J.R. Macleod, Dr. Frederick Banting and grad student Charles Best had made substantial progress in extracting a material from the pancreas they called insulin but had not reached the point where it could be used on humans without side effects.

Because of his advanced knowledge of biochemistry, Dr. Collip was invited to join the team. He went to work in a separate lab on campus on December 1st, 1921 and by early January 1922 had purified the insulin extract so that it could be used safely on humans. On January 23rd, 1922, it was used for the very first time – and successfully – on a dying 14-year-old boy at Toronto General Hospital. Since then, the lives of countless of millions of diabetics around the world have been saved.

Watch the video below to learn more about Dr. Collip, Belleville’s little-known hero.